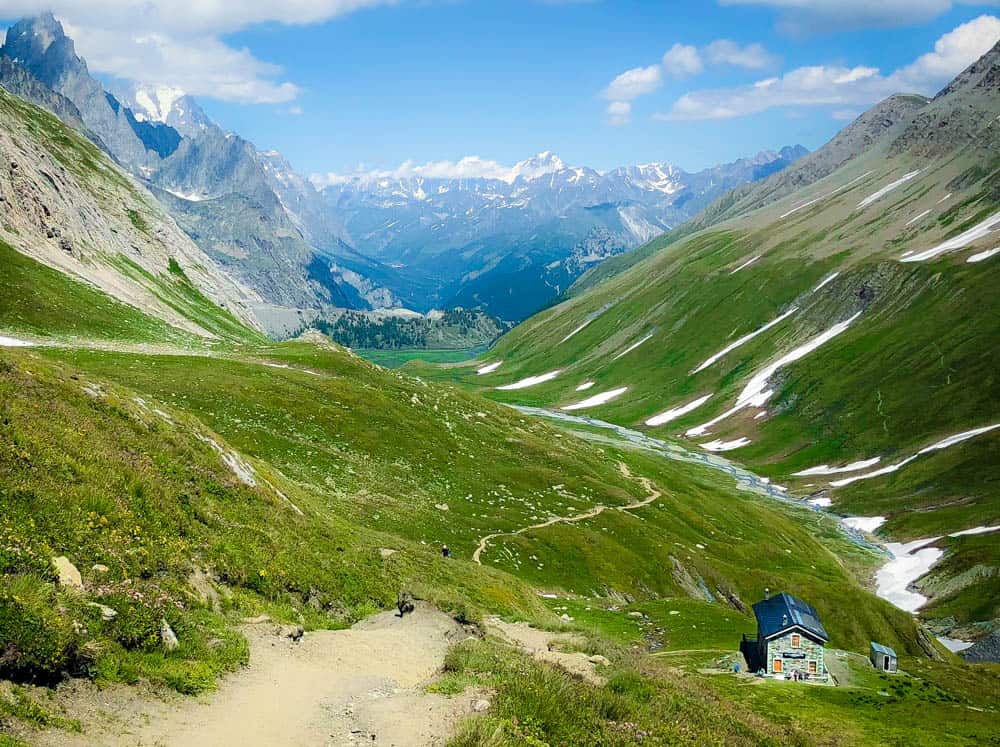 Perched on the Col de la Seigne, a remote location on the mountainous frontier separating France and Italy, the Casermetta Espace Mont Blanc museum is a welcome sight after slogging over the 2516m high Col de la Seigne and descending into Italy.

At an altitude of 2,365m, this renovated customs hut has been transformed into a cross border environmental education centre and is well worth a stop for anyone trekking the Tour du Mont Blanc.

La Casermetta houses a huge array of descriptive exhibits of the natural, environmental, geographical and historical aspects of the Mont-Blanc area and aims to educate the public on the fragile environment of the area. It’s also a strategic point for acquiring scientific data for monitoring the mountain ecosystems as well as data on hikers walking the Tour du Mont Blanc

The restoration of the Casermetta was one of the practical actions undertaken by Especa Mont-Blac as part of the Operational Programme Italy-France ALCOTRA 2007-2013 and the complex now consists of an information, display and reception area of excursionists, two lodgings for the centre and the Forestry Corps of Valle d’Aosta; a shelter for hikers on the TMV (abri du randonneur). Durin ghte summer when the structure is open the specialised staff of the “Montagna Sicura” Foundation organise themed entertainment workshops around natural hazards, glaciology, flora nd fauna, safety the the mountains, physiological adaptational to altitudes and renewable energies.

The Col de la Seigne has very ancient roots with medieval terms Mons San, Collium de Senia. Alpis Seniae make reference to Colle deal Segnale, whilst the Celtic term ‘sange’ means a marshy land which is oufnd lower down int eh area of Lc Combal. By the end of the 19th century, the Cold de la Seigne appears in tales of British travellers and mountain climbers due to the fame being acquir3d by the Tour du Mont Blanc. However this fame of the Col de la Seigne turned into notoriety during the second world war, when a series of military outposts were built along the frontier between Italy and France, which included La Casermetta in Cold de la Seigne This was the darkest hour experience by these places and even now all around there can be seen the remains of fortifications and gun emplacements. The end of the war saw the story of the Casermetta finally head in another direction, In the winter of 1945, a group of aspiring ski instructors got together under the direction of Francis Salluard to bring the Scuoula di Sci Monte Bianco back to life, appropriating the skis in white ash abandoned but eh Germany army in Cold de la Seigne during their precipioutus flight after 25th April that year. These areas have now returned to being a meeting point for all those who come in discovery of this glorious section of the alps.

The Lammergeyer, the biggest Euripen bird of prey, wrongly accused of being a threat to flocks, called the lamb vulture, resulting in the species dying out in the area at the beginning of the twentieth century. Thanks to an internal campaign for th reintroduction of the bird back into the Alps, the bird has Cold de la Seigne has become an important observation site for nesting lammergeyers. If you happen to sign one of these magnificent brides whilst you are hiking, your can contribute to the reintroduction plan by filling in an observation form available at the centre.

People have always thought of Mont Blanc as a massif characterised by the presence of granite, an attitude which has pushed to forget the large variety of other rocks present in it. In fact, besides the rocks that originated in the earth’s curst – which make up most of the massif, there are others which formed in a marine environment. In the area of Cold de la Seigne and along the Val Very route, there are rocks which developed in an ancient ocean – the so called Valis basin- in a era raining from the Upper Palozoic to the Cretaceous, between 300 and 66 millions years ago. This area – where limestone dolomite, gypsum and cornieules, sandstone, as well as black and grey schist can be found – is called by geologists the ‘Zone des Brèches de Tarentaise”. During the formation of the alpine chain, remunerable upheavals and displacements occurred due to precisely to the presence of soft rocks which crushed and caused the neighbouring hard rocks to slide and overlap. Among the most typical peaks of the area, there are th ePyramides Calcaires, entirely made up of limestone and dolomite: these rocks at at odds with the great amount of granite present on Mont Blanc and contribute to giving the massif a unique look.

With 3D model of Mont Blanc, the museum has an excellent video of glaciation in English and exhibits of flora and fauna and quizzes for kids.

The staff at Casermetta all speak excellent English (any many other languages!) and have all been trained in specialist fields of environmental science. was rebuilt during the Interreg IIIA Italy-France Alcotra program by Espace Mont-Blanc. On the inside visitors will find a 3D plastic model of the Mont Blanc massif (maquette) and descriptive panels illustrating various aspects of natural, environmental, geographical and historical aspects of the Mont-Blanc area.

The Casermetta is equipped with an energy supply system based entirely on renewable energy sources: solar panels, photovoltaics and a micro hydropower system.

Col de la Seigne, a pass known as far back as Roman times, continued to be used throughout the Medieval period. This was when its current name came into common use. The favourable climatic conditions during this era meant that mountain passes at high altitudes could be used for a large part of the year.
However, it was not until 1863 that the Tour of Mont Blanc, and above all Col de la Seigne, was given pride of place in the tales of English tourists and mountaineers. John Ball, President of the Alpine Club, expressly mentioned Col de la Seigne, considering it one of the most scenic places on the route, which “always makes this part of the tour extremely interesting for real nature-lovers”.

The history of the Casermetta
The Casermetta at Col de la Seigne bears witness to a period in which the relationship between the nations on either side of the Alps was rather strained. In fact, it used to be an outpost on the border between Italy and France, constantly watched over by garrison troops.
During the 1930s, in a period of increased international tension, the Mont Blanc region was used for spectacular military drills, with troops practising at high altitudes. Col de la Seigne’s darkest moment came in World War II, when an attack on France, already defeated by Nazi Germany, was carried out by Italian troops in the region. The remains of firing points and fortifications can still be seen today throughout the area.
After the war, the history of Casermetta finally took a turn for the better. In winter 1945, a group of aspiring ski instructors met, under the direction of Francis Salluard, to resurrect the Scuola di Sci Monte Bianco (Mont Blanc Ski School). They faced serious obstacles, with few funds and no ski equipment. But the trainees managed to appropriate the white skis, made of ash wood, which had been abandoned by the German army at Col de la Seigne during their hasty retreat on 25th April.

Today Col del la Seigne and the Casermetta, rediscovered after years of neglect, have become a meeting point for all those who, sharing the spirit of adventure of the first travellers, want to discover this wonderful part of the Alps.

A troop garrison, known as the Casermetta, was active for many years at the Col de la Seigne, on the border between France and Italy. In the 1930s, during a period of increased international tension, the Mont Blanc massif was used by both countries wanting to demonstrate their military might, and large drills and troop exercises were undertaken at high altitude. During World War II, at a time when the French army had already been defeated by Nazi Germany, France found itself under attack again, but this time by Italian soldiers in many alpine locations including the area around the Col de la Seigne. Evidence of past fortifications and old firing points are still visible throughout the area[119] 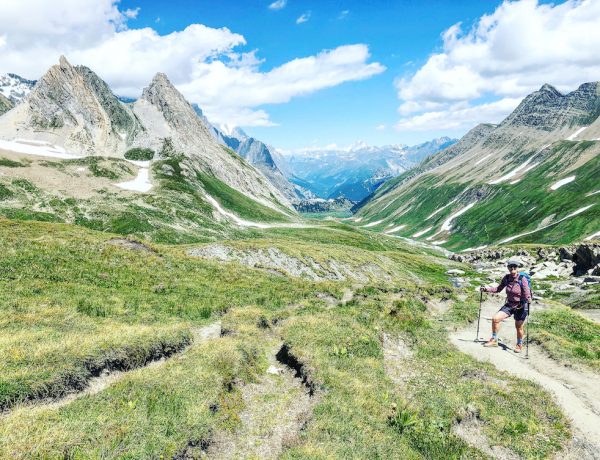 fauna & flora on the tmb trail 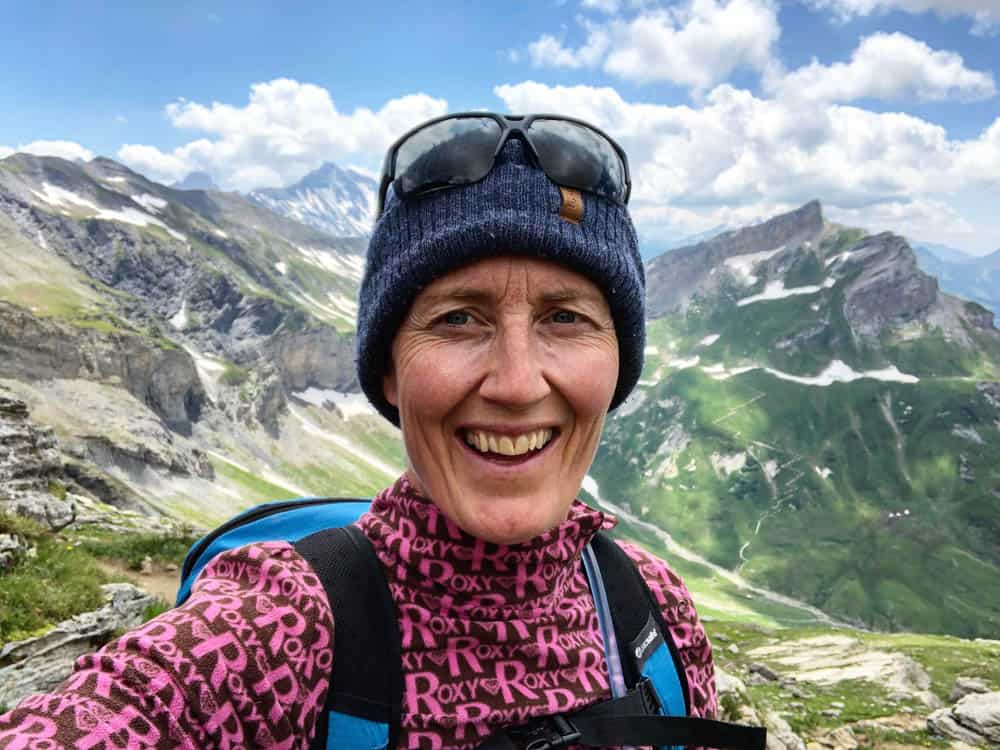 Hey I'm Mags. Based in Chamonix in the French Alps, I'm lucky to live at the foot of Mont Blanc and the start and finish of the famous multi day trekking route - the Tour du Mont Blanc. A couple of years ago I hiked the TMB with my 10 year old girl and 65 year Mother & fell in love with this incredible hut to hut trek through France, Italy & Switzerland. Planning our route the first time, especially for opposite spectrums of age and fitness, it was hard to find the answers to so many questions before embarking. I've created this website to answer the many questions I had before we set off. I hope it helps you plan your own Tour du Mont Blanc adventure. Happy trekking!

WATCH NEIL MACLEAN-MARTIN, OLYMPIC PHYSIO & MULTIPLE FINISHER OF THE UTMB TALK YOU THROUGH SIMPLE EXERCISES TO HELP GET YOUR BODY ADAPTED TO THE TOUGH CONDITIONS ON THE TMB 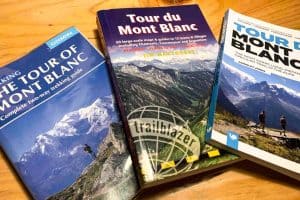 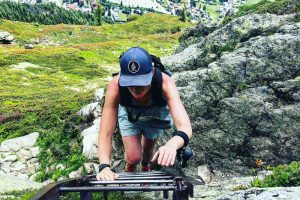 Tour du Mont Blanc difficulty – can you manage the ladders? 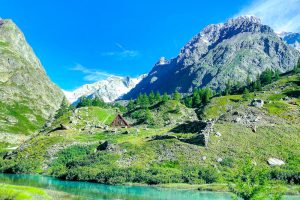 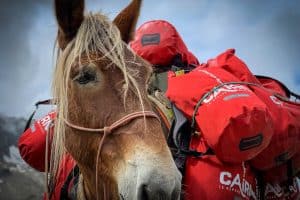 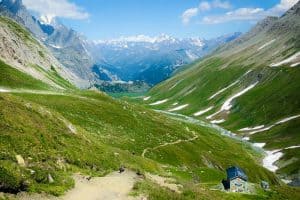 Can I take my dog on the Tour du Mont Blanc?

With incessant rain in Chamonix throughout the who

Descending the Col de la Seigne into Italy on the

With all the rain here in Chamonix over the last t

How to get fit for your Tour du Mont Blanc? The

Refuges are booking up quickly on the Tour du Mont

We use cookies to improve your experience on our site and to show you personalised advertising. By clicking “Accept”, you consent to the use of ALL the cookies.
Cookie settingsI'M OK WITH THAT
Manage consent

This website uses cookies to improve your experience while you navigate through the website. Out of these, the cookies that are categorized as necessary are stored on your browser as they are essential for the working of basic functionalities of the website. We also use third-party cookies that help us analyze and understand how you use this website. These cookies will be stored in your browser only with your consent. You also have the option to opt-out of these cookies. But opting out of some of these cookies may affect your browsing experience.
Necessary Always Enabled

Performance cookies are used to understand and analyze the key performance indexes of the website which helps in delivering a better user experience for the visitors.

Analytical cookies are used to understand how visitors interact with the website. These cookies help provide information on metrics the number of visitors, bounce rate, traffic source, etc.

Advertisement cookies are used to provide visitors with relevant ads and marketing campaigns. These cookies track visitors across websites and collect information to provide customized ads.

Other uncategorized cookies are those that are being analyzed and have not been classified into a category as yet.